Hot Tub pump plumbing connections can be very confusing, mainly because they are described as being an imperial size eg 2.0" but not actually measuring 2.0" anywhere.
Very Confusing !!

First thing to know there is more than one type of thread type used !
In around 98% of cases your pump thread will be whats called a Buttress thread. This stems from the hydraulic industry and is good for pressure fittings.
The other less common type is BSP thread.

You can normally tell the two apart by quite esily, if you have a butress thread it will be a coarse thread where as a BSP thread is finer thread. But the best and esiest way to tell the difference used is by looking to see where the O ring placement is.

This is where is gets confusing, a lot of pumps and pump union sizes are described by an imperial size - for example the most common being 2 inch now if you are too measure the pump union thread it will not measue 2 inch

When looking at pump unions and the sizes, make sure it refers to the thread size not the pipe connection size which have the same / similar descriptions (another common issue is the pipe size which is also refered to in an imperial size and you guessed it is 2.0" and once again nothing measures 2.0" (please refer to our help article on pipe / plumbing sizes for further reading) 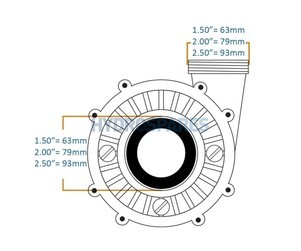